Michka Saäl’s films always stood out for their openness to the other, and for a willingness to listen that helped her capture small everyday acts. She celebrated the inspiring lives of those who were fortunate enough to appear in front of her camera. In this posthumous film, shot in Montreal in 2013 and completed by her colleagues and friends, the filmmaker salutes the beauty of Montreal and its people. From the back alleys of the Plateau to artists’ apartments, from a passionate recycling advocate to a queen of the night, everyday heroes are the subject of this final film. They are humble folk, faithful to their personal ethical sense, determined to make the world more beautiful. They are true adventurers, especially as seen by Michka Saäl.

Director or crew member in attendance 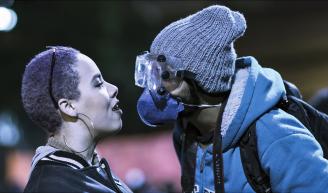