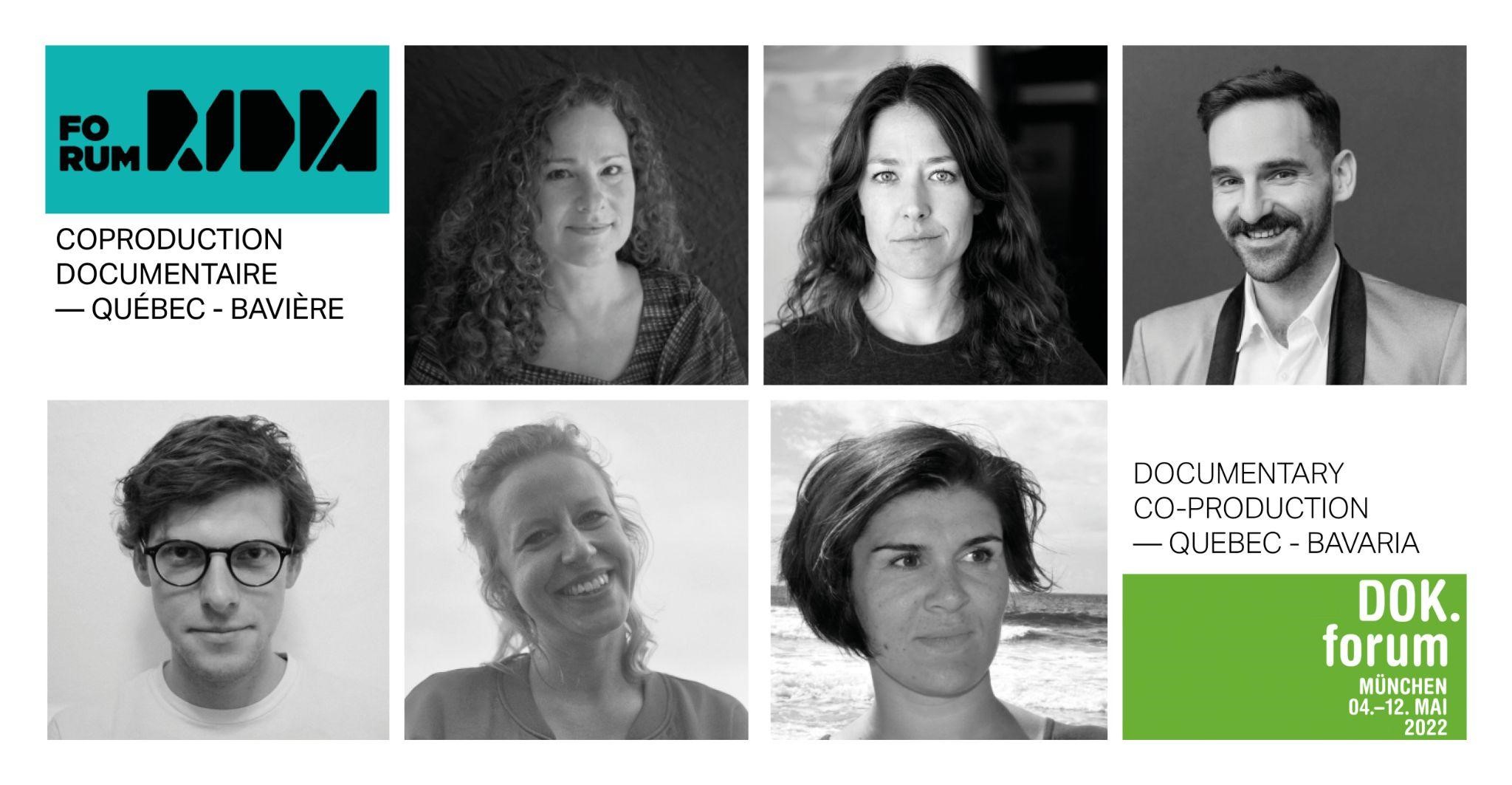 Forum RIDM is pleased to resume the QC+BY DOC COPRO program, starting in May during the 37th edition of the DOK.fest München festival. Launched in October 2018 by the Forum RIDM and DOK.forum during the RIDM in Montreal, the first edition of this biennial initiative ended with great success in June 2020 in Munich. This second edition will once again allow the selected producers to meet and exchange in person in Munich from May 4 to 12, 2022 and then in Montreal from November 19 to 23, 2022.

The purpose of the QC+BY DOC COPRO program is to develop international documentary co-productions and to promote film cooperation between Quebec and Bavaria. This program supports and enhances the local film industry by offering co-production and training opportunities to producers and by allowing them to meet peers from other regions. This initiative contributes to the emergence of a new generation of producers capable of maintaining fruitful and lasting relationships with Quebec and Bavarian professionals, while highlighting talent on both continents.

The program includes training, mentoring and networking workshops in order to optimize the meetings between the Quebec producers in Munich and the Bavarian producers in Montreal. The program, which began over a year ago, allowed participants to work on a specific documentary film project in development with a strong international co-production component.

This activity is made possible by an investment from the Ministère de la Culture et des Communications as part of a wider Quebec-Bavaria cooperation initiative.

The producers selected for the QC+BY DOC COPRO 2021-22 program are:

Stacey Tenenbaum is an award-winning creative producer and director. In 2014 she founded H2L Productions, a boutique documentary film production company specializing in crafting character-driven stories that are shot internationally. H2L Productions’ first documentary feature, Shiners, was broadcast on the Documentary Channel, TV5, and PBS. Her second film, Pipe Dreams, was released theatrically across Canada and the US and was broadcast on Documentary Channel, ARTV, NHK and PBS Independent Lens. Stacey's latest production, Scrap, will premiere at Hot Docs in May 2022 and will be broadcast on documentary Channel, YLE and ERT. The film will be also be released theatrically across Canada by Northern Banner releasing. Before turning her attention to film, Stacey worked in factual television for 16 years, producing and co-creating award-winning documentary series such as The Beat (CTV) and In Real Life (YTV). In 2012, Stacey was nominated for an International Emmy for In Real Life III.

Line Sander Egede was born in Copenhagen in 1986 and has been living in Montreal since 2015. She has been producing short films, documentaries and music videos since 2010. Working with Danish director Malou Reymann, she produced three short films, including the medium-length film Interruption, and most recently the documentary Distance, which premiered at CPH:DOX in 2018. Line has a bachelor’s degree in TV and Media Journalism from DMJX. Since moving to Montreal, she graduated from the Cinema program at L’Inis, and in 2020 she produced the feature film Vacarme, directed by Neegan Trudel, which premiered at CINEMANIA and PÖFF and won an Iris Award for Best first feature in 2021. That same year, she released Babushka, a short documentary directed by Kristina Wagenbauer, presented in official competition at the 24th RIDM. Her most recent production, Gabor, a feature-length documentary directed by Joannie Lafrenière, will be released in theatres in May 2022.

After a career in communications and advertising, Giacomo Nudi pivoted to his first love, film. After studying at L’inis (The National Institute of Image and Sound), he joined production company Les Films Outsiders, then co-founded Cosmos Films. Drawing on his experience in marketing and impact strategies, he has overseen, from concept to release, films that sensitize audiences to a variety of social issues, and, above all, support creators from underrepresented communities. A warm and sensitive person, his projects in development are highly diverse: shorts, features and web series, both fiction and documentary.

Born 1984 in Minneapolis, Maximilian Haslberger graduated from Filmakademie Baden- Württemberg in 2013. That same year, he founded the production company Amerikafilm, with the aim of creating a framework for artists and auteurs to explore a broader scope of what cinema can be. In 2014, his production Asta Upset by Max Linz premiered at the Berlinale and was shown in German cinemas in 2015. Other films he produced have been successfully screened at numerous festivals and multiple times at the Berlinale, including Music & Apocalypse by Max Linz, Golden Twenties by Sophie Kluge, Uchronia by Azin Feizabadi, The Great Void by Sebastian Mez, Nakskov 1:50 by Matilda Mester and Shall I Compare you a Summer's Day? by Mohammad Shawky Hassan. Projects with Adina Pintilie, Eva Knopf, Max Linz, Anna Sofie Hartmann, Nicholaas Schmidt & Anne Döring as well as Sebastian Mez are in development. He is a member of the German Film Academy. In 2017 he was a member of the jury for the ‘Förderpreis für Filmkunst’ of the Neue Nationalgalerie’s film arts award.

Sophie Ahrens (she/her), works as a producer and is based in Berlin and Bavaria. Sophie believes in thought provoking, innovative, queer and diverse stories and emerging film and talent. She got a master degree in Film and TV Production at the Film University Babelsberg. In 2017 she founded Schuldenberg Films with Fabian Altenried and Kristof Gerega. Their fiction feature Neubau was recently awarded Best Debut Film at the German Film Critics Association Awards. Sophie participated in the Rotterdam Lab 2021.

Project: Dancing on the Edge of a Volcano

Katharina Weser was born in 1988 in Augsburg, Germany. She studied French, journalism and film in Germany and France. After her studies, she worked in France for several production companies as an assistant producer and director as well as a journalist. In 2014, she joined Atelier Ludwigsburg-Paris, a program for young European producers. Together with her partner Georg Neubert, she opened a production company, Reynard Films, in early 2016 in Leipzig. In 2020 they opened a branch in Agawang, Bavaria.