Those Who Feel the Fire Burning by Morgan Knibbe

preceded by Hotel 22 by Elizabeth Lo 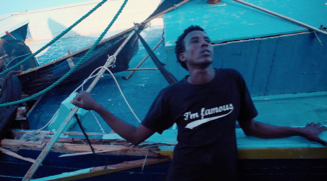 Montreal, Wednesday, February 10, 2016 – From January through August 2016, the Montreal International Documentary Festival (RIDM) presents its year-round programming, including the monthly film series now known as RIDM+. In February, discover Those Who Feel the Fire Burning,directed by Morgan Knibbe and showcased in Quebec premiere on Thursday, February 25 at 8 p.m. at Cinéma du Parc. The documentary feature film will be preceded by the short film Hotel 22 by Elizabeth Lo.

One of the most acclaimed documentaries of 2015, Those Who Feel the Fire Burning takes a novel approach to an exploration of one of the biggest issues of our time: the fate of the countless refugees landing on European shores. Through a subjective aerial camera representing the soul of a man who died at sea, filmmaker Morgan Knibbe follows several people filled with hope but haunted by trauma. An unforgettable visual poem, Those Who Feel the Fire Burning attempts to renew the language of cinema in order to better capture the political and human upheavals of our time.

In the heart of Silicon Valley, bus no. 22 runs 24/7. For many homeless people, it is an essential refuge. Each night, as it loops around its route, its passengers sleep and warm up – as long as they are fortunate enough to have a sympathetic driver. Hotel 22 won the award for best short film at the prestigious Cinema Eye Awards.

THOSE WHO FEEL THE FIRE BURNING

In the original English