RIDM+ JUNE: Eat that question: Frank Zappa in his own word

Eat That Question: Frank Zappa in His Own Words 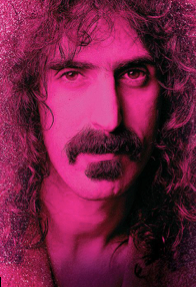 Montreal, Tuesday, June …, 2016 – From January through August 2016, the Montreal International Documentary Festival (RIDM) presents its year-round programming, including the monthly film series now known as RIDM+. A Sundance selection, Eat That Question:  Frank Zappa in His Own Words, by Thorsten Shütte, is one of the year’s most eagerly anticipated music documentaries. It is finally coming to Montreal, where it will be the next RIDM+ film, on Thursday, June 30 at 8 p.m. at Cinéma du Parc.

Frank Zappa (1940-1993) remains one of the most intriguing figures in 20th century popular music. A giant of a counter-culture he generally hated; a brilliant, prolific and demanding composer; a satirist and sworn enemy of political hypocrisy in all its forms: as a documentary subject Zappa is both ideal and intimidating. Made entirely from archival footage of Zappa’s public appearances (concerts, television, speeches, etc.), Eat That Question:  Frank Zappa in His Own Words invites us to rediscover Zappa in his own words. From his first appearance on television in 1963 to his work with the people of the Czech Republic in his final years, the film’s expert and creative editing reminds us of the uniqueness and uncompromising political commitment of a faux-hippie who warned an entire generation about the perils of “yellow snow.”

EAT THAT QUESTION: FRANK ZAPPA IN HIS OWN WORDS directed by Thorsten Schütte

In the original English