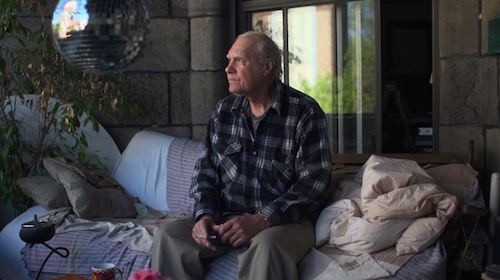 Montreal, Monday, August 8, 2016 – From January through August 2016, the Montreal International Documentary Festival (RIDM) presents its year-round programming, including a monthly film series, RIDM+. To close the 2016 series on a high note, RIDM+ will present the world premiere of STONE STORY (HISTOIRE HIPPIE, in French) by Jean-André Fourestié on Thursday, August 25 at 8 p.m at Cinéma du Parc. For the occasion, the filmmaker, the producer and main protagonist of the film Martin Stone will be on hand at the screening for a Q&A session.

STONE STORY is a lucid and touching portrait of Martin Stone, who has, for better and for worse, upheld 60s counterculture values all his life. Although he now works, ironically, as a security guard for a condo building, Stone still follows the principles of sharing and free expression that he adopted decades ago. Through testimonials from Stone’s children and old friends, Jean-André Fourestié tells not only the fascinating life story of a man who seems to have experienced all the iconic cultural moments of the 60s, but also explores the effects of the hippie lifestyle on children, who were often left to their own devices.

The 2016 RIDM+ series has taken us around the world, and now STONE STORY brings the year to a close with a journey back home, into the unusual and inspiring life of a Montrealer whose door is still open.

Quebec | 2016 | 88 minutes | In the original English with French subtitles

Premiere at RIDM+ on Thursday, August 25 at 8 p.m. at Cinéma du Parc

Distributed and produced by InformAction Films, STONE STORY will then open on August 26 at Cinéma du Parc.