Montreal, Wednesday, June 9, 2021 - For the third year in a row, Telefilm Canada, in partnership with Forum RIDM and in collaboration with the Hot Docs Canadian International Documentary Festival  (Toronto), is proud to announce the venue of Docs-in-Progress – Canadian Showcase.

This year’s Marché du Film at the Cannes Festival will take place in a hybrid format from July 6 to 15, 2021. The 2021 online edition of Cannes Docs will include 8 showcases from different countries, each composed of four docs-in-progress, presented in a pitch format followed by a 10-minute excerpt from the film. The Canadian Showcase will virtually take place on Tuesday, July 6 from 4:15 to 5:30 p.m. (France time) and on site on Friday July 9 starting 11:45 am (France time). The event will allow the producers and directors of the four Canadian works to pitch their films to an audience of buyers, distributors, festival programmers and international sales agents.

Leading up to the event, Forum RIDM will provide pitch training to each project’s representatives and provide personalized guidance for their online presentations. It will be an excellent opportunity for the producers and filmmakers to present an excerpt, give a presentation and launch their films on the international market. 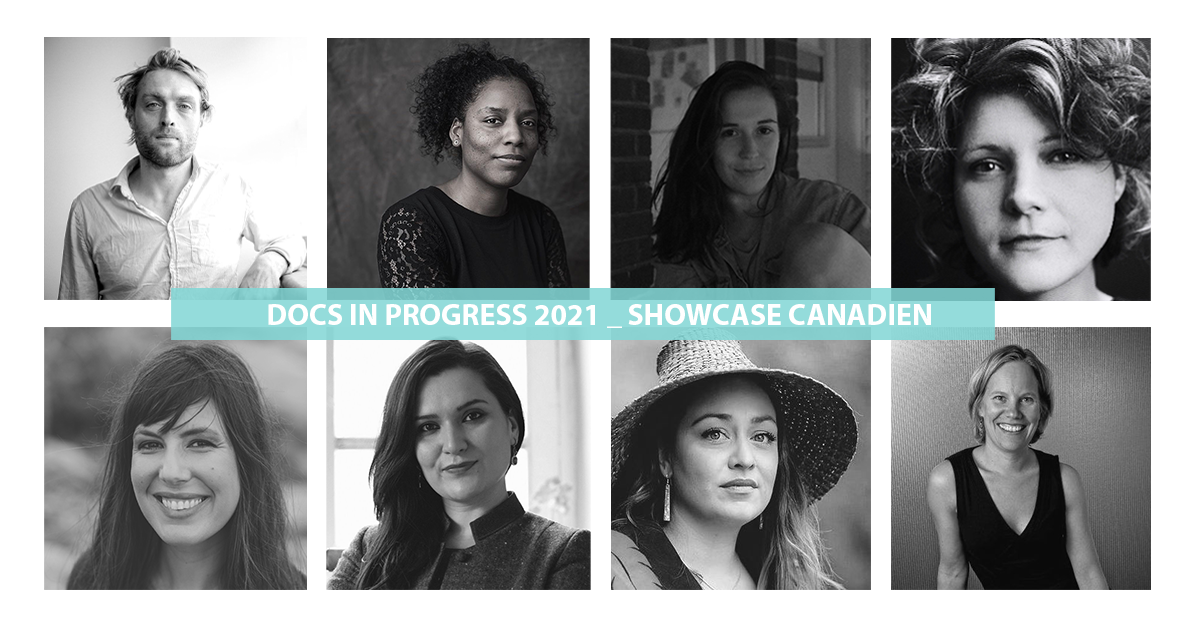 Here are the projects selected for Docs-in-Progress – Canadian Showcase 2021 :

Miryam Charles is a director, producer, and director of photography living in Montreal. She has produced and photographed several short fiction films as well as feature films. She is also the director of several short films which have been presented in various festivals in Quebec and internationally. She is currently working on her first feature-length documentary This House (Talents en vue, SODEC) on short fiction film Au crépuscule (SODEC créateurs émergents), a fantastic series X (Banff/Netflix Diversity of Voices + Trio Orange) as well as a feature- length fiction film Le Marabout (La Forge Québec Cinéma/Netflix + Voyelles Films).

Born in 1981, in Chicoutimi, Quebec, Félix Dufour-Laperrière is a director, screenwriter and producer. His work, which shows a constant tension between narrative and formal exploration, maintains a close connection with the visual and contemporary arts. His films, including the documentary Transatlantic (2014), have been screened in numerous major national and international festivals, museums, and events, where they have won several awards. He is now starting the production of his third animated feature film, Death Does Not Exist.

After studying cultural production at UQAM and finishing a specialized graduate diploma in management at HEC, Rosalie Chicoine Perreault begins her career in cinema by accumulating various experiences in production. In 2019, she starts working at Metafilms as a producers’ assistant. As of last year, she began developing projects as an emerging producer and now count 7 films to her credits.

Songs She Sings In Shadows

Fazila Amiri is an Afghan-Canadian director and producer based in Toronto. She holds an MFA degree in Film Production from York University (2019) and a BFA in Film Studies from NSCAD University (2012). As an independent filmmaker, her short films The Red Bicycle (2020), Unknown Artist (2018), and The Photograph (2017) have been shown in the 2020 Canadian Film Fest, 2018 Hot Docs International Canadian Documentary Festival, and Atlantic Film Festival. Currently, Fazila is in post-production of her feature documentary film Songs She Sings In Shadows through the Telefilm Canada's Talent to Watch program.

Lesley Johnson is a producer based in Toronto whose work focuses on intimate stories that connect personal transformation with environment and culture. She holds an MFA in Film Production from York University, is an alumnus of RIDM’s Talent Lab, Breakthrough Program and Sundance's Documentary Collab program. As a producer, her projects have appeared on CBC, APTN, and been selected for TIFF and Canada’s Top Ten. Her films have won awards and screened at international festivals.

Wochiigii Lo, End Of The Peace

Heather Hatch is a mixed-race filmmaker whose focus is on writing and directing films that explore female and Indigenous stories. Her first documentary, Woman Who Returns, explores themes of re-matriation and identity - premiering at the Edmonton International Film Festival and seven international festivals.. Heather is the first recipient from the Gil Cardinal Legacy Fund and was a top six selection to the Whistler Film Festival's 2018 Indigenous Accelerator film program for her short film, Wrecked. She was accepted to the 2019 Hot Docs Accelerator and the Netflix Diversity Banff Fellowship for the feature length documentary, Wochiigii lo, End of the Peace.

Ava Karvonen is the founder of Reel Girls Media and has been internationally recognized for 35 years with over 100 films screened worldwide and more than 50 awards and nominations to her credit. So far, her society has produced 7 series. She recently produced the critically acclaimed documentary, Finding Bobbi, a story of a woman who returns to stage 20 years after last performing as a man. She directed seasons 1 & 2 of Chaos and Courage for APTN, the CBC special, Keeping Canada Alive, Homefront (with media embedded in Afghanistan) and Seeds of Change (taking her to China). Ava has mentored 35 filmmakers with the National Screen Institute.

Telefilm is dedicated to the cultural, commercial and industrial success of Canada’s audiovisual industry. Through funding and promotion programs, Telefilm supports dynamic companies and creative talent at home and around the world. Telefilm also makes recommendations regarding the certification of audiovisual coproduction treaties to the Minister of Canadian Heritage, and administers the programs of the Canada Media Fund. Launched in 2012, the Talent Fund accepts private donations which principally support emerging talent. Visit telefilm.ca and follow us on Twitter at twitter.com/telefilm_canada and on Facebook at facebook.com/TelefilmCanada.

Since 2004, Forum RIDM, Quebec’s documentary forum co-founded with DOC Québec, has supported and stimulated independent documentary production, enabling discussions among professionals, artists, producers, distributors and exhibitors of every stripe. Now taking place over five days, Forum RIDM has enhanced its program with mentorship initiatives (Talent Lab) and professional sessions that take an active role in the creation of new documentaries and the training of new talent.